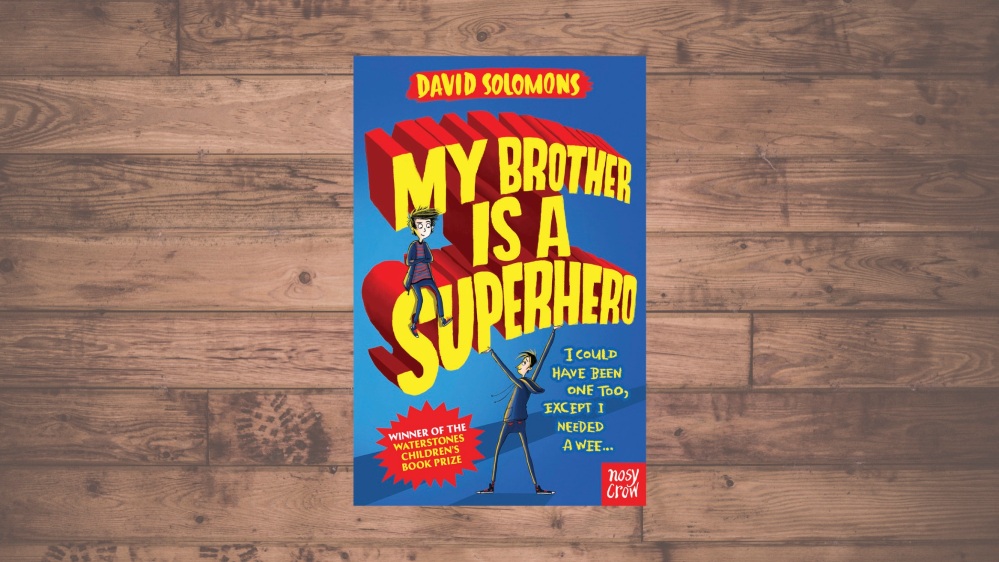 IF YOU LIKED THIS, YOU’LL LOVE:
Kid Normal by Greg James and Chris Smith
Iguana Boy by James Bishop
My Evil Twin is a Supervillain by David Solomons
The Astounding Broccoli Boy by Frank Cottrell Boyce

MY THOUGHTS: geeky pre-teen boys reading comics and inadvertently having the fate of worlds thrust upon them… your typical after school activities!

Luke Parker is a comic-obsessed 11-year-old who shares a treehouse hideout with his older, more academically-inclined brother Zach. Luke has an encyclopaedic knowledge of superheroes and would give his left arm to be one, so when Zorbon the Decider visits from a parallel universe to bestow super powers on a human in order to save both their worlds, Luke’s moment has arrived! That is, it would’ve been his moment if he hadn’t gone for a wee; instead, his (rather undeserving) brother is granted Luke’s greatest wish. Luke moves through feelings from awe to jealousy to hatred as his brother plays out HIS fantasy, until the dreaded Nemesis makes an appearance and Zach (a.k.a Star Lad) is kidnapped right when the world needs him most. With the help of his equally comic-obsessed best friend Serge (who’s French) and annoying neighbour Lara Lee (the younger sister of Zach’s ultimate crush), can he track down Star Lad in time to save 2 worlds from total annihilation?

Another well executed take on the ‘regular kid gets super powers thrust upon him’ theme. Some slightly more mature themes touched upon (very brief passes made of these areas but they’re in there nonetheless) such as girlfriends and puberty, hence the age suggestion. It is quite wordy in places which could make it difficult for a Year 3 to access independently and contains lots of references that would be largely lost on younger readers. It broaches lots of relatable topics including school, homework, friends, moving to high school and girls (gasp!). I like the realistic portrayal of Luke’s feelings towards his brother (let’s face it… you’d be devastated too!) and the journey he goes on to acceptance. Humorous in places with lots of specific superhero facts throughout. An enjoyable read for pleasure.